Holding Our Breath & Crossing Our Fingers

The old adage, "Third times the charm" is hopefully about to prove itself.

We're down to literally holding our breath and crossing our fingers!

All 9 of our Arizonan crew are about to embark on Symphony of the Seas.  We celebrating in so many ways.  A belated 40th anniversary for Steve and I.  If you popped by here a few weeks ago, you know we just passed 41.

We also have Sarah's 40th birthday and Adam's 38th birthday!   It's a bit early, but Sam and
Adam have their 12th anniversary in about 3 weeks.  If all that isn't enough-Aidan is graduating middle school and Bryce is leaving kindergarten.

I'm feeling a lot less pain in my eye-however the vision is far from "normal".  Plus, I'm really hoping I get through that long travel time with the help of some lidocaine patches and pennsaid gel.  Neither works really well on regular everyday terra firma, but I have high hopes that I will enjoy our long awaited family cruise.

Please learn from my stupid mistake!
Steve and I went for our yearly eye exam. It actually wasn't too bad.  I was told the reason my eyes were having problems was because my eyes were getting better!
Seems only fair.
But my dry eyes were becoming more of a problem and I still can't afford the prescription drops I used to take.  I've been getting by with over the counter drops since moving here almost 10 years ago.
The optometrist suggested that I get this tube of extra strength oil based salve.  He even gave us some coupons!
Off we trudged to Walmart and bought them.
Stupidly and unfortunately for me it was a same size tube as a tube of oragel.
Me thinks you already know where this is going.Trust me on this you never want to mix up these tubes!
I was washing out my eyes for the rest of the evening.I used ice packs. I also made sure I had a nice soft washcloth around because my was dripping everywhere. I remarked to Steve that I hadn't have this much liquid coming out of my eyes since I had cataract surgery!Lol
This morning I woke up in a bit less pain. However my cornea is quite red, my lid is swollen and I am still not able to open it very well.  Or for very long.
I'm writing this one-eyed.I
Remember kids-always read labels and don't mistake oragel for an eye lubricant!!!
# posted by Carine-what's cooking? @ 10:11 AM 0 comments

Seems like only last year we celebrated our 40th!
This year we're hoping to actually get on our long-awaited and often re-scheduled cruise.
Happy anniversary dearest Steve!
# posted by Carine-what's cooking? @ 11:12 AM 0 comments

Sigh. My body failed me again.
This time: plantar fasciitis, tendonitis and my back.
Orthopedic put me back in the boot for at least a month.
# posted by Carine-what's cooking? @ 10:21 AM 0 comments 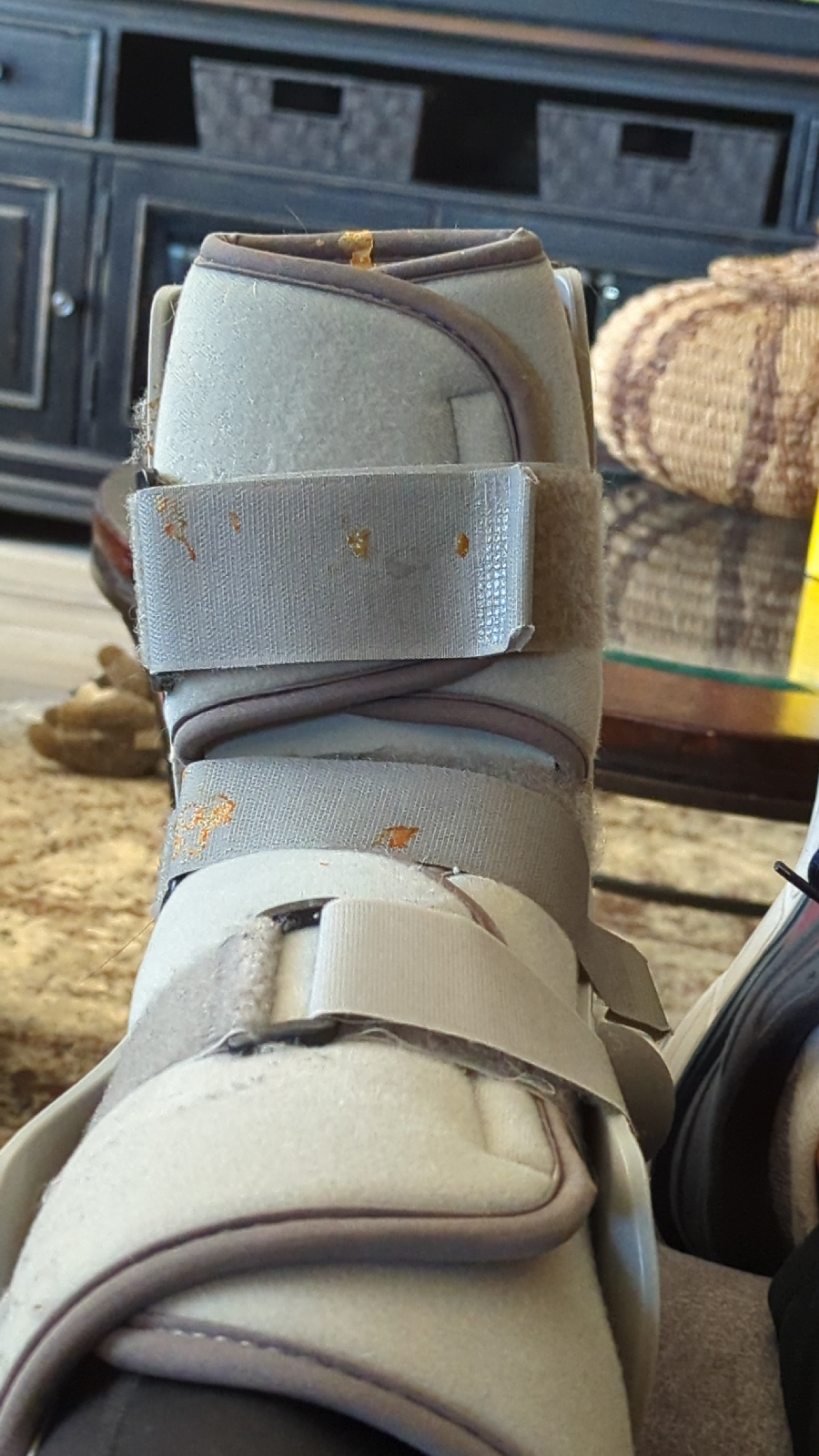 All About the Girls

Not gonna lie.This week has been all about the girls.
While the older one has done just fine with her stitches and her teeth being pulled, the younger one has had some difficulties.
Of course,The older one has been our little drama queen. She can hardly wait for someone to pick her up and tell her everything would be fine. She only lost 2 teeth and has a mere 2 stitches where are the chat used to be under her ear.
Her sister, also lost 2 teeth, but she now only has maybe 8 or 10 left in her mouth. Four of  which are her fangs in the front!  Because she had that skin tag at the top of her head and a rather large cyst on her neck she must have been in more pain than Lucky.
While she never whined or showed any signs of pain,  she did manage to rip four of five stitches out from her neck.  Pretty good, considering she was wearing the "come of shame"!
Steve and I bought CBD lavender calming spray as well as various forms of ointments and bandages to keep her at bay until Monday morning.  I threw on some sweats and got her down there at 7:30 only to find out that they didn't open until 9 that day. Sigh.
When I took another look at her neck however it looked like it was sealing up!  Not wanting to watch our baby shaking like a leaf for an hour and 1⁄2, I drove us back home and took a look and it looked as if everything was fine.  I had taken some pictures the night before when it really looked pretty ugly. Since Steve and I were on our way to run errands we decided to stop and show the get the photos.
Because of the size, she wanted to make sure that no infection was setting in and asked me to bring her in the next afternoon. She prepared us for possibly having to have a staple put in.So I did. Thankfully, no infection and no staple!  Just one visibly shaken dog and one very upset older sister to cuddle the rest of the week.
It's truly amazing -we still worry about our two legged middle-aged kids!  Now, we also worry about our 4-legged ones as well.
I have to admit, however, it's much easier to pick them up and take care of them!
# posted by Carine-what's cooking? @ 7:27 AM 0 comments

This week, our little girls had their teeth cleaned and a little minor surgeries on both their minute noggins. Well under anesthesia, the doctor also gave them a thorough going over and clip their toenails.
The good news is that the skin tag on Sunshine's head is now gone, as well as that cyst on her neck.  A bonus is that she only lost 2 teeth this time! Of course, I also have to point out that the poor thing only has 6 upper teeth and 4 lower teeth.  Four of those teeth are her front canines. The remaining are all molars at the back of her mouth.We were informed that she probably was not going to be able to eat dry food anymore.  She now has 3 stitches on the top of her head, 5 on her neck and some in her mouth. Those various areas had fur shaved.  She came home and gave me the total stink eye while she was bobbing her head up and down-debating whether or not she wanted to sleep.
Lucky did fair a bit better.She also lost a couple of teeth but only in the front of her mouth.  Her cyst was only 2 stitches.  But I still got quite the stink eye.
For the next 2 weeks Sunshine will only be allowed wet food.  If we choose to give her dry food, from here on out it will have to be soaked in broth or water until it's mush.
Steve was the one who picked the girls up. He said he felt quite faint when he got the bill.  Even with our senior/dental discount it was well over $1400!!!
But we love them.  What would any parent do?
It did include a host of blood work,the exams, the nail trimming, the surgeries and Lucky's bordatella booster. They also sent us home with the needed pain meds, cones (in case they wouldn't leave their stitches alone) and antibiotics.
I get the task of taking them back in a couple of weeks for the surgical stitches to be removed and their mouths checked.
# posted by Carine-what's cooking? @ 8:23 AM 2 comments

It's hard to get sympathy for cold weather when you live in a desert. But this week has truly been  test to see how much a person who hates the cold can deal with.
The rain wasn't really so bad. Thankfully, the day that was the worst when I had grandma pick up duty, the rain was down to a drizzle when I had to leave and it didn't start back up again until I was on my way home.  Some parts of our little town got hail.
I call that divine intervention!
Yesterday morning, the girls decided they had to go to the bathroom at 4:45 AM.  It was too early for me to get started but too late for me to just go back to bed and try and get a little more sleep before Steve's 5:30 AM alarm went off.  Ugh!
When I open the door the girls and I are were assaulted with literally freezing air.  When I asked our favorite box lady to tell me the weather she informed me it was 26° outside.The girls ran out, did their business and shot back in the door as if they had been shot through a cannon!
As soon as they scarfed down there breakfast, in record time I might add, they ran for there daytime beds and through the blankets over themselves.
That was at 5:00 AM.I couldn't get them out of those beds to go for another trip T too the potty until well after 11.  Even then the fact that I made them go was not received in good humor.
Today we woke up to 39°. And somehow, we've been informed that we will be back into the 80's.  While the 3 of us can hardly wait for our usual morning power walk, none of us want to do so until it gets it least in the low 50s!
Again, I know no one feels bad for us!  No slush, no ice, we have Sun-but I still would rather have those 2 months of over 120 than any kind of winter.
# posted by Carine-what's cooking? @ 6:49 AM 2 comments