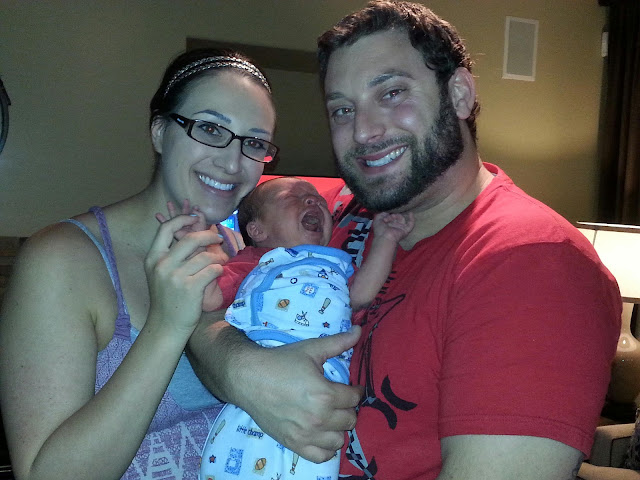 It's All About "The Jackson"

It’s All About “The Jackson”

As you’ve guessed by the photos, our third grandson Jackson has arrived.

Sam, as far as I’m concerned, is a miracle worker and one strong woman.  At 9 lbs., 5 oz., and 21”-Jackson Dale is one healthy, handsome and wonderful little boy.  Thankfully, mother and baby are doing great and the new dad-he’s having the best “vacation” of his life caring for his new family.

Our new arrival has blue eyes, which could very well turn hazel or green.  He’s got a full head of brown hair.  Thanks to his father, Jackson has shoulders that most football players only dream about-and his lungs?  They are quite strong.

The new family was greeted by their fur kids-who were incredibly happy to see them.  As expected, Toby the Maine Coon did a bit of smelling and looking and went back to his usual routine.  Lily, the older of the two shelties has decided that Jackson is an awesome addition to her pack and is making sure he and Sam are kissed, watched and well-guarded.  Billy, the youngest fur kid who’s always a bit timid, backed away until curiosity got the best of him.

Slowly and much to his parents delight-he decided to “brave” the situation and has decided to help his sister in the guarding of their new sibling.

I took Dylan over first to meet his new cousin.  He sighed, giggled and asked to give him a kiss and a hug.  Adam said a soft kiss on the cheek was great and he could touch his arms and hands-but to not go near his head.  The traditional parent talk about the soft spot followed.

Jackson first held Dyl’s finger.  Dylan was amazed at how small his cousin’s body was, “look at his tiny fingers!  His booties are so small they won’t fit on my thumb.”  We pointed out that he was a LOT smaller when he was born.  He couldn’t believe it.

Then Jackson stretched and let out some baby noises.   Poor Dylan-he had no idea and jumped in the air by several inches and let out a yelp of worth himself!

Later I made the “switch” and brought Aidan over for his “meet and greet”.  He was concerned about his beloved Auntie Sam having to feed Jackson without a bottle.

Neither of our older grandsons believed how Jackson would be eating for the next several months.  Both pointed out that applesauce would be good. “You don’t need teeth for applesauce.”  And what was wrong with cow milk?  Looking at things through the eyes of a 5 and 6 year old, I’m imagining it is hard to realize that baby milk is similar to the time they milked a goat at a goat cheese farm in Hawaii.

And now, our son is a dad.  It’s an amazing thought for me to wrap my own head around.   On April 24th, 1984 I gave birth to a tiny preemie who had a multitude of obstacles to overcome on his way to becoming the caring and strapping husband and father that he’s become.  He has wanted to be a husband and dad since he was a toddler.  He never cared about playing GI Joe.  He just wanted to have “a wife and a baby”.

Pretty deep for a little guy to think about and grasp on the comprehension of the family concept, no?

And now he “has it all”.  He and Sam will be fantastic parents and I know that they’re going to be very happy.

May it continue forever.  I just hope that I’ll be around to watch Dylan, Aidan and Jackson (and any other love bugs that come our way) become fine young men who will then give us the honor of becoming great-grandparents.

The family is growing-isn’t it the best?