I had been seriously wanting to adopt another cutie-patootie for a while.   Pepper, please Lord, will hopefully be around for another 5 or so years, but he's 13 and while still healthy and active, he has gone from playing with Lucky all the time to just "now and then".

Lucky is now somewhere between 4-4/1/2.  My biggest concern is that since I'm no longer allowed to walk 5 days a week she's not getting enough exercise and looking a tad "fluffy".  I felt that maybe having another dog around the two would play with each other.  Especially now that Adam and Sam have adopted another dog to play with their Lily.

Steve was NOT for the idea:  It will cost too much, two animals are just fine, what if there's a big vet bill and we can't afford it.

So I let it drop.

We had to go to PetSmart Tuesday to return some stuff that Pepper was refusing and get another bag of dry food and they host the Halo Rescue for both dogs and cats.

I didn't say anything, but Steve said, "Let's go see the pups."  No argument here.  There were mainly pit bulls, pit bull mixes and Chihuahuas and Chihuahua mixes.  All looking so sad, some barking, some hiding, some begging for a way out!

Then we saw a little Chi/Daschund mix.  She was adorable and talking away at us.  And next door was a very quiet, sad looking tan and white Chi mix who just had eyes and markings that made us both tear up at how they reminded us of our beloved Goldie/lab Sunshine.  Steve asked the volunteer to bring her to a room so we could "meet and greet".

Turned out she's a real daddy's girl.  She looked up at him, kissed him and when he walked across the room she followed him.  We had them do a "cat" test and she did great.

We decided to come back with Lucky the next day.

After picking the boys up from school, we told them we were going on an errand.  Lucky, so far, has been very happy with her new bigger, yet younger sister.  We did have a touch of growling this morning when Sunshine wanted to cuddle with Steve and Lucky was still firmly velcroed to my side.

Also, Pepper has both smelled and kissed her and Sunshine reciprocated.  But Sunshine is big enough to jump on the bed herself (Longest legs on a Chi ever) and decided that Pepper's usual spot in my left armpit was the perfect first night sleeping area.

We're going to have to work on that.  We'd never want Pepper to think he's not wanted!  Honestly, Sunshine sat either next to Steve on the couch or on top of him for the evening so I thought she'd want to continue that theme throughout the night.

As I type this, Lucky is curled up on the couch in the office and Sunshine is right here on my lap.

Details you ask (since her first picture isn't that good)?  11 pounds, 1 year old, mostly tan with white markings and big brown eyes.  Curly tail.  She hasn't tried her voice out yet.

The boys were not really happy about grandpa wanting to use Sunshine's name, "It's sad grandma, what's Sunshine going to do?"

I was just a bit in agreement, but swallowed the lump in my throat and said, "Well, Sunshine was never sad, always so happy and loving.  While we still miss her dearly, grandpa really wants to keep her spirit alive, so I think Sunshine would love that we adopted a pup and gave her a chance to continue to be a part of our lives."

Now we move forward on potty training (Lucky's helping with that!), family rules and how the 5 of us will sleep on that king-sized bed. 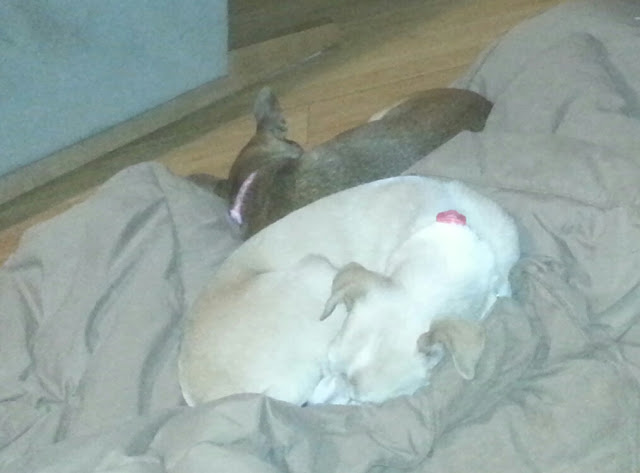