Dylan and his Chinese name 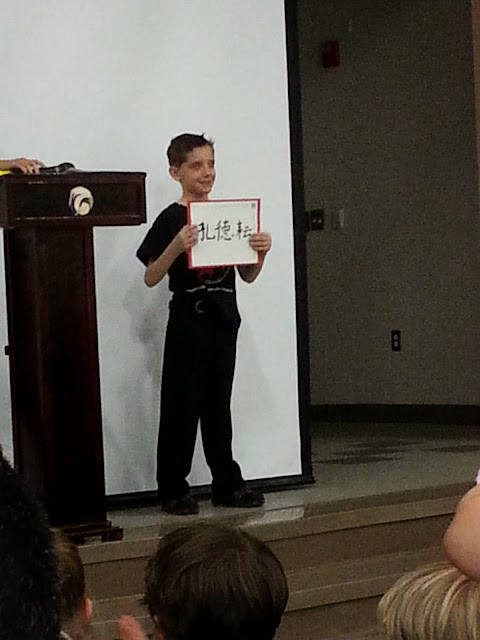 It’s hard to believe that my “baby” just hit a milestone birthday-30!  Our daughter, Sarah will turn 32 this next week.


Being birthday season, we also have both my sister-in-law, our brother-in-law Dave, our nephew Jonathon, my dad and our son-in-law Alex.


But wait, there’s more!  We also have mother’s day for the grandmas, our daughters (this is a special one as it will be Sam’s first!) and sisters.  We won’t be celebrating with any of the extended family since they are now a full state away.


Then we’ll throw in Adam and Sam’s 4th anniversary on the 10th of May.  Last but not least, Steve’s sister and our brother-in-law will have their anniversary at the end of the month.  Again, we won’t be joining in any celebration.

Earlier in the week I made out my list of needed cards to create courtesy of our membership with American Greetings and I began to make the cards.  I start with Adam who begins the line-up and work down the rather long list.


I was successful in getting his and Sarah’s completed and moved on to #3 when something went awry.


Technology reared its ugly little head at me AGAIN!  The outside of the card made it through perfectly. I put it back in to print the other side and the printer made a few grunts but refused to do its job.


With Pepper enjoying some cuddle time on my lap I carefully rolled my way over to see in the little box: cartridge is either missing or disconnected.


Really?  Because you were working just fine for 2-1/2 cards worth and nothing has changed!


So much for getting this job tended to and finished.  I sent a text message to Steve.  Not that he can do anything from 32 miles away, but I’m finding that if I don’t do things like this I’ll totally forget about these nagging problems by the time he comes home in the evenings.


Sigh.  I thought I’d just create the 10 cards that I am personally responsible for getting done and ready to drop at the post office-but no.  I actually don’t have the ones I will need for our ritual Birthday Bash dinner.


Besides our busy “birthday and more” events, our Dylan is having a special moment in school.  He is in the Mandarin Program and this week the 1st graders were having a “naming ceremony”.  The kids will all be given Chinese names that the teachers have decided describes them the best.   It is a rather interesting notion that the same kids who are having a time of understanding the concepts of adding and subtracting and learning the difference between nouns and predicates  are more than capable of counting and writing in a language as difficult as Chinese.

The ceremony was short and sweet.  Don’t ask me to tell you the phonetically aloud name, but it means:  virtuous and hard working.


Being a former teacher I applaud the teaching staff and all the hard work that must go into teaching young antsy kids all the various subjects in two and very different cultures.  Supposedly the kids who have the fortitude to keep themselves in the program through the end of el-hi will be given scholarships to the local Arizona Universities.


Should be very interesting to witness the coming years with the kids and their progression and if the promised monies will actually be forthcoming.

Later we went to dinner where Aidan and a ceramic plate collided.  He didn’t get dinner-neither did mom and dad.  The bridge of his nose was gushing blood all over him!  Luckily that new trauma center opened up literally across the street.


They all came back in time to say goodbye to Sam, Adam and Jackson.  We stayed with Sarah and the boys while they re-ordered.  Dyl had stayed with us (no sense him being in the hospital!).  The doctors used some super glue and Terri strips.


One thing about Aidan-he’s one tough little trouper.

Now I won’t “see” you until May so I’ll wish you a wonderful end to April and enjoy the spring weather!