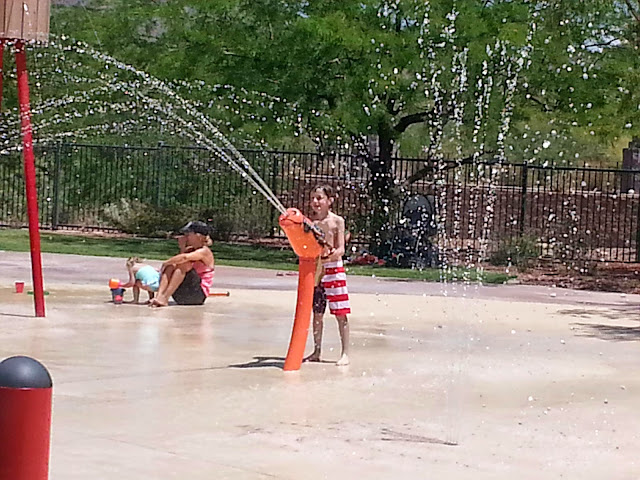 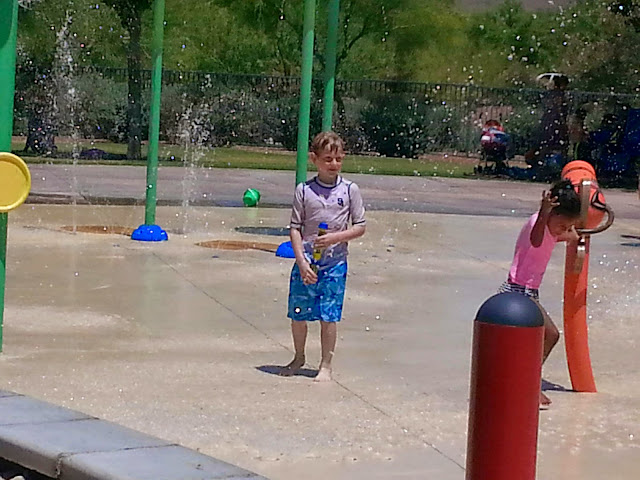 My daughters and I went on a “road trip” with Aidan, Jackson and Lucky.  It was a pretty good trip all in all.  It was great to see my family and catch up.  Didn’t really do very much-but it was fun.

While Sam and Jackson headed out with her mom and sisters for the weekend after dinner Thursday, the rest of us remained at my sister’s home.  Sarah made arrangements to see friends Friday.  While everyone else did their thing (you know, work), Aidan and I made some plans for us and Lucky!

Aidan’s request was to go to the dinosaur park at the community center.  We walked down the “creepy” staircase located next to my sister’s home with my pup and had a great time.  Aidan found a little girl to play with while I chatted with another grandma who lived in Palm Springs.  Obviously, we had a lot in common!  Later-some playing in my sister’s pool, despite the overcast skies and cool temperatures.

This was Lucky’s first road trip.  She wasn’t sure why she was in the car and was scared to death when we arrived at my sister’s and she saw all these “strangers” plus the two very friendly dogs who resided there.

She was shaking like the proverbial leaf and dug her head in my neck.  Eventually (2 hours) she decided no one meant her any harm and slowly lowered herself to my lap and then the floor.  They played fine the rest of the vacation.

Only thing she didn’t want any part of?  Doing her business in their yard!  Thank goodness for the neighborhood full of interesting smells.

Saturday was spent relaxing by the pool, buying my mom’s Mother’s Day gift (her choice were new orchid plants) and more relaxing.

Sunday had my sister taking my parents to a funeral.  Sarah and Aidan went to Universal Studios to test out the new Despicable Me ride and the rest of the park.  Lucky and I hung out with Dave, my brother-in-law and Jonathon, our nephew.  I learned a lot about their hobbies!  Dave has always loved his very extensive and unique shell collecting from all over the world.  Jonathon is quite the aquarium expert!  He also taught Aidan quite a bit about the fish, including how the loss of a favorite one feels as bad as the loss of a furry pet and how to introduce some new ones to the “top dogs”.  Jonathon let Aidan help feed them, clean some of it, bury the deceased one and learn about how to thin out the ever re-producing snails.  He also showed him how an encased jellyfish (a gift that’s really a paperweight) glows in the dark.

For 6-year-old Aidan this was quite the highlight!  When I asked him if it was neat to have a cousin, he told me, “Yes, especially when they’re a cool cousin grandma!”

The trip home was arduous however.  Poor Jackson hated being confined, yet again, to his car seat.  Aidan tried to keep him entertained with funny faces, duets with grandma and “puffs”.  Lucky was none too happy about being put into her crate for the first and only time during the trip when we made a lunch stop either.


The worst part though?  Yours truly made the most stupid move of her life!  Sigh.  I realized about an hour into our trip that I had a lot more leg room than the first trip.  I looked down.  I had my camera case, I had a bag of books to read to the boys, I obviously had the kennel-what I didn’t have was my PURSE!!!


We called my sister-yep, there it was in the bar area along with Lucky’s bag of bowls and dog food.


Sarah said “No way am I turning back!  Tell Auntie to overnight it.”


Overnight on Memorial Day means I didn’t get it back until Wednesday afternoon.


Too say this was an inconvenience is a total understatement.  I never realized just how important the contents of my purse were.  Besides the “nothing” things such as lip balm and tissues, I had to go without important things like: house keys, car keys, wallet-which contained credit cards, driver’s license and medical cards and my smartphone.


Steve and I are going back on Father’s Day.  Good thing too-Lucky wasn’t too enthralled with her new makeshift bowls for her daily dining pleasures.