Behind his innocent look, two seconds later Pepper knocked everything to the floor.  He hates clutter. 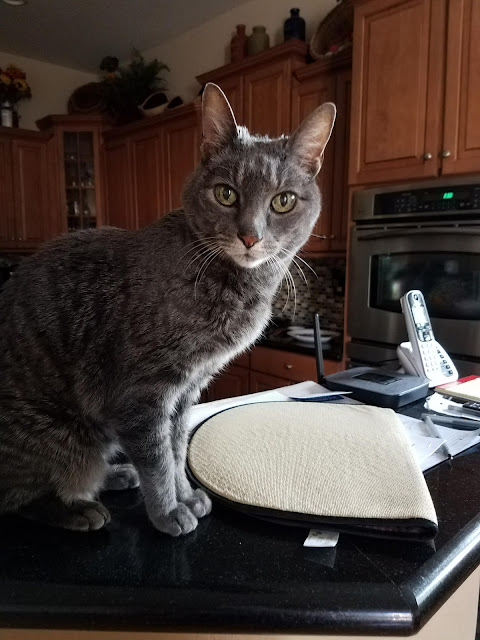 I am in VF/RA Hell

It was bound to happen.  I was even warned.  Too combat the RA inflammation as best the medical world could during this time I am not allowed to treat it while my Valley Fever is still "active", I've been muddling through with the help of:  Epsom salt baths and an RA size dose of Naprosyn.  In lay terms-I take 2-1/2 over the counter pills in the morning and again in the evening.

But it was with the understanding that I'd have to stop by 6 months.  My thought process says that the VF crew thought that by now the disease would have either gone dormant or at least my titer numbers would say I was no longer active and therefore RA drugs of some kind could start.

Well, that did NOT happen.  Latest chest x-ray shows that the right lung still has a nice sized "nodule of opacity that needs to be re-evaluated in a month".

Knowing that Steve and I are leaving for our 37th anniversary cruise very soon, I decided (in all my intelligence) to stop taking the NSAID last week.  My thought process on that was that I'd have 2-3 weeks without the meds and would re-start a couple of days before I had to get on that plane and try to have fun.

Guess what?  Turns out Naprosyn was doing more than I ever could imagine to keep me moving.

I'm about 9 days out from my last dose and I still have a headache stemming from my herniated discs in my neck and bad rotator cuff.  Obviously the shoulder, neck and the herniated discs at the lower end of my spine, my hips, knees, feet, hands and even elbows are screaming at me.

Then came the "news"-called my pain management doctor to discus what could be done since I'm not allowed epidurals. (Steroids make the spores grow)  We changed medical companies last fall and despite the fact that I checked and was told she was definitely IN network-seems she is NOT.

So here I am, a total mass of pain who has breathing issues.  Should be quite a romantic anniversary celebration, no?