Hard week for all of us. 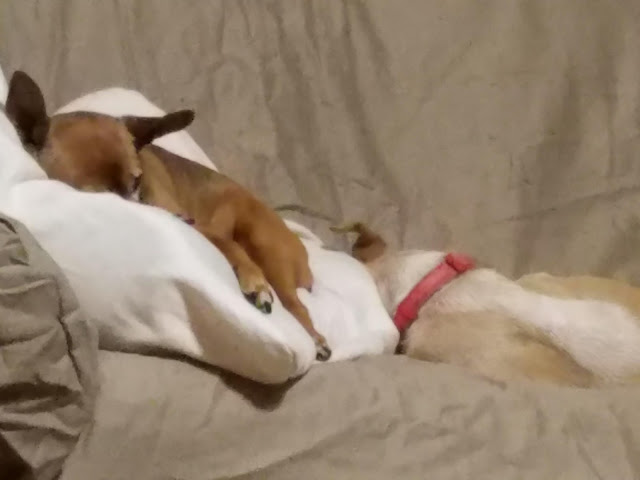 Trying to stay upbeat while dealing with a multitude of "painful crap" is exhausting.  Unless you've "been there, done that", you probably aren't aware of how tiring it is to be in pain and then be told by several "specialists" that they "honestly don't know what to do for you".

This week I went back to the pain management guy who brought out his trusty fake spine and proceeded to explain to me that I probably wasn't able to get this "stimulator" installed because of my severe osteoporosis, but that it might be an option if we could get the okay from the rheumatologist.

After about a minute of showing me three fairly thick looking "wires" (they looked like cables to me) and explaining how they'd open my spine and feed these in and "try them out" for three days-he stopped mid-sentence and said, "I see you're not wanting this and since you won't qualify, I'll stop now."

Then he decided that since I have so many issues that he thinks I should see a spine surgeon.  He's hoping that since I have "two fractured, yet healed, vertebra" that they might decide to fuse the lower back and that might help the hips, knees and the issue in my foot.

Seriously?  But on the flip side, I'll go because I'm open to almost anything (NOT the cable wiring in my spine though).

Then the next day I went to my "knee" guy.  I practically begged them to x-ray my foot and was turned down, sort of.  No x-ray, but he was happy to let me know that the practice just hired an "excellent foot/ankle" surgeon.

Then he showed me my knee x-rays.  I did NOT enjoy the explanation of how "bad" they look both inside and out either.  But since they do look as if I may not be able to take even water aerobics without some intervention much longer-they are contacting my insurance carrier and requesting those lovely gel shots that worked for the one knee two years ago, but this time they'll do both knees at once.

Hey, if I'm going to pass out from big, thick needles into my knee-might as well get both and do it once.  Then hopefully I'll get some relief for a couple of more years.

As I left, they "signed me up" for an appointment with the next specialist for my stupid foot.

I'm feeling slightly defeated.  I'm allowing myself a bit of a pity party.  Really, I think I deserve it.  This morning I knew I was going to enjoy Jackson's company for most of the day, so I skipped water aerobics to both let the meds kick in and have energy.  By the time his early dismissal time arrived, I hooked up Sunshine, Lucky (my partner in not having a leg to stand on) and the stroller and limped up to the school.

We stopped at the park, we had some lunch, read some books and even put together a Teenage Mutant Ninja Turtles jigsaw puzzle.  Then, thankfully, we all needed a rest.  Jackson watched Honey I Shrunk the Kids, I iced numerous extremities, Lucky 3-legged herself into my lap and Sunshine hid under a blanket while Pepper curled up on a pillow.

Sometimes I have a bad day, sometimes I share it with you.  Sorry.