It may have been short but I guess it was tiring. 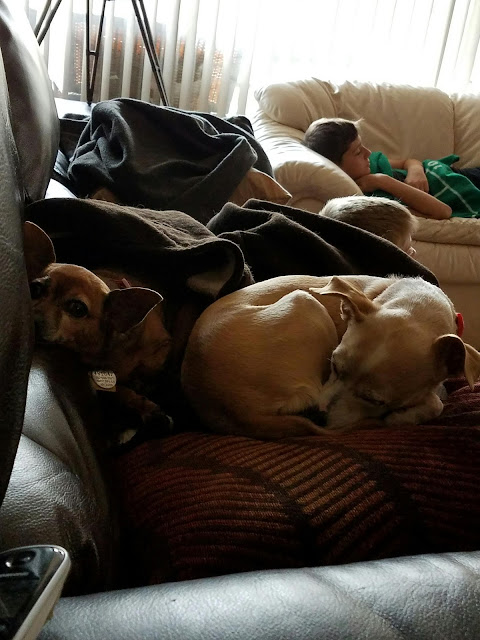 Ants in Their "Pants"

As I related last week, Poor Sunshine had quite the ordeal with her dental surgery.  A total of 5 molars and a cavity ridden tooth were all removed.  A mouth full of stitches and a whole new understanding of some of her quirks were revealed.

Our vet was in tears thinking of all this little pup had endured and not only lived through but managed to be 99% loving and wonderful.

Our hearts broke for our newest addition and gave us more tools to use in training.

Six days later we took Lucky in to have her teeth cleaned.  We held our breath!  Even though we've had Lucky 4 years now, there hadn't been any tartar or black marks/red gums, etc. to put her through anesthesia.  Even this time was a "you might want too, but her teeth look great!".

So on Valentine's Day we took her in, went to see "Hidden Figures" and waited for some news.

By the way, if you haven't seen the mentioned movie, please do!  It is a really great piece of not only education but entertainment.  Unfortunately it also still proves we have such a long way to go in equality!  Their was a young couple sitting next to me and the man actually leaned over to his wife/girlfriend and said, "I thought you said this was a docudrama?  No one would actually treat people like that!"

OMG!  Shows that our schools are NOT giving enough lessons on the subject of prejudice and what the 60's were really like!

Back to Lucky.  During the previews Dr. Young gave me a call and said Lucky's back teeth looked great but that she had 4 front teeth that were so loose that she didn't know how they were still in her mouth-so out they came.

At pick-up I was told that our itty-bitty did fantastic but was milking the experience so her favorite tech would hold her until she heard my voice.  Kind of figured-when we had her spayed she whined and cried on my lap for about a week.  Maybe little tiny bodies feel pain more than larger ones.

Fortunately, because they teeth to go were the tiny front ones Lucky isn't having her dry food turned to mush the way her sister is still having to eat her meals.

Once Steve and I got her home we were practically ambushed by both Pepper and Sunshine!  We had a feeling that it would happen.  Both were kissing her head, smelling her and whining/meowing and probably asking her all sorts of sibling-related questions.  She didn't seem to mind the attention.

Both are doing much better, in fact once this is posted Dr. Young has approved of taking them both on a shortening version of our walk.  I did take them with to the part with the boys yesterday afternoon so they could enjoy the neighborhood grass spot.

But wait, that's not all!  On our way back to the house after their "dig to China", we found some neighbor kids standing on the block wall!  I asked them to please get down right away as I didn't want anyone to fall and get hurt (plus, our wall is booby-trapped to prevent another burglary).  The kids said they were following BEES!

Yep, a swarm of bees are back there right now deciding whether they'd like to build a hive to leave for more preferable grounds.  The bee inspector just left and said to give them another 48 hours and then if they stayed to either have them come back and kill them or try vector control to see if a beekeeper might want to take the rather pesky problem out of our yard.

And that is life for us here in the desert.  Have a good weekend!