When our kids were little, obviously someone was always getting a bump, bruise, scrape, broken bone or other malady.  Hey, it's part of growing up.  But when you're a grandparent, you figure you won't be too involved in some of all this-unless you are like Steve and me.

Since we are caregivers to Dylan and Aidan 2-3 days a week, we are the one's who need to handle the immediate little things-you know the items I'm talking about:  Scrapes on the face or knees (or wherever) while rough-housing after being told not to touch each other only about a dozen times.  The pokes in the eye from some hug that got out of hand and moved to hitting and annoying the heck out of each other and their grandparents.  The crying because someone's movie was 30 seconds longer than the other and "he still gets a turn".

Ah, the fun of child-rearing.  I'd say the "second" time around, except that besides Sarah and Adam, Steve and I raised over 120 kids over the course of 10 years as day care/pre-school teachers.  So this is not the second or even third time we've heard the screams, the cries and the "it's not fairs".

This week, Steve wanted to go to the local bagel place for breakfast.  It's a hangout for many-bagels are quite good, they' carry Boar's Head meats, coffee is good and there are a LOT of choices.  Plus, for a mere $5.75 you get a bagel with your choice of meat, cheese and egg and a re-fillable coffee.  Our favorite?  Steve goes for a toasted everything with gyro meat, provolone and egg.  Me?  I'm more of either the 9 grain toasted or pumpernickel with the gyro meat and egg.   Coffee is a must if I want to be coherent and tolerable for the rest of the day.

After that, we toddled across the street to Albertson's (grocery store for those of my Euro readers)and bought the sale items we needed.  Hey, we're serving ribs for Father's Day and they had them buy 1, get 3 free!

Then we texted our older grandsons' father and let him know to have the boys ready for pick up.  That's when we were told that the eldest boy (Dyl) had managed to hit his head and that even though it looked better-he had given himself quite the "Egg".

Sigh.  Seems other than watch him and put some ice on the knot between his eyes, Dylan just went on as usual.

Thankfully, it was Maker Camp day and the creative work on the menu was to make their own board game.  The boys had fun and then, since Uncle Adam had the day off, asked him over to play several rounds of their version of Chutes and Ladders.

When Sarah came we let her know of the Goose Egg story and she spent the remaining portion of the night in the ER making sure it was just a bump that needed rest.  No MRI or CTscan needed.  But yes there's a slight concussion there and she had to wake him ever 3 hours.

As I write this, we're getting ready to go to the library for Ninja Mania day.  Upon our return, there's a bit of reading (less for Dyl since he's supposed to rest) and lots of NOTHING.

We're under yet another round of excessive heat warnings-it's presently 9:30 a.m. and the temps outside are already a mere 102.  So they know better than to ask for the pool, the water park, the splash pads or the park in general.

Aidan is giving me quite the argument-but I'm older, wiser and maybe a slight bit more patient than I was in my younger years.  And in a minute, if I snap-he'll find out that it's in his best interest to do what grandma says and not what he wants, if he wants to survive the summer.

Now that we're back-it seems grandma was right-it was a lot of fun.  Besides the photos below of the new Jenga Masters, the boys made Ninja masks, Ninja kisses (cute jars with chocolate kisses in them), origami Ninja stars, finger puppets, wobbly Ninja masters and even got another temporary tattoo.

The boys even became "models" for the library's FaceBook page-they were proud to show off their building skills for all of Anthem to see. 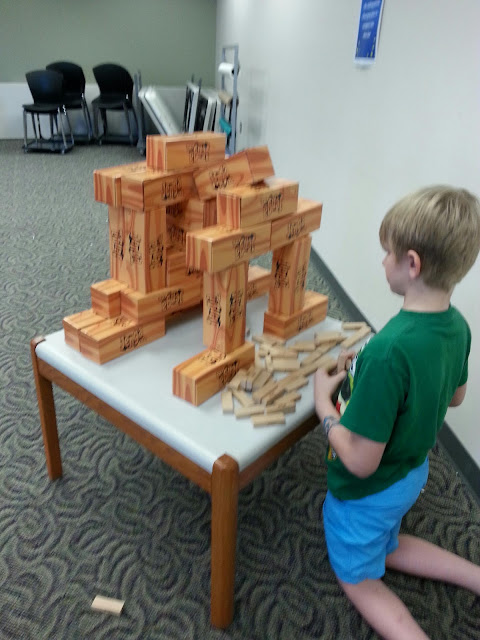 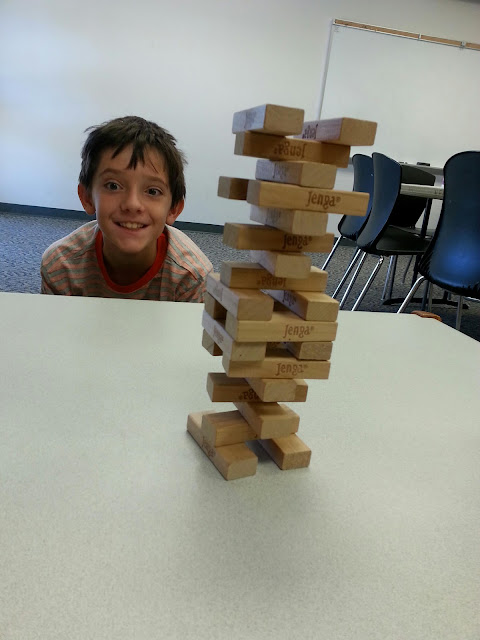