The boys give playing this gentleman's game a whole new meaning. 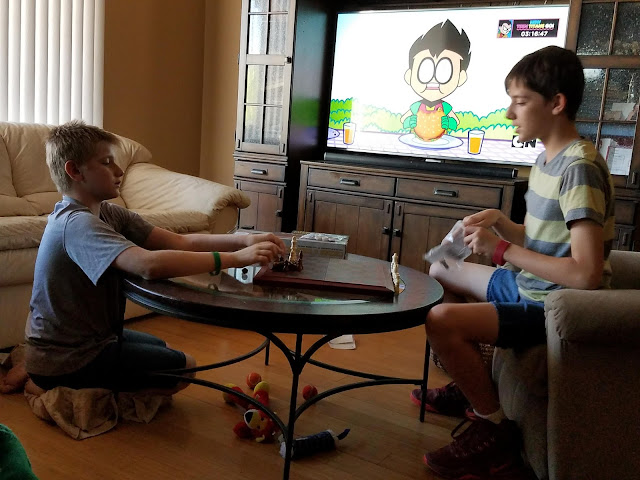 This past week has been quite a tragic eye-opener, no?

I'm, of course, talking about Las Vegas and the debacle that is now known around the world.  We all hear the stories of loss, panic, terror and grief-to say "it's awful" is a total understatement and yet, there's not really any stronger language that fits.

My sister, Felicia and our niece Morgan along with their friend Cherokee were there.  Went for a girls' weekend of music and fun.  Instead, they got to be part of something they never imagined.

Fortunately, they were about 10' from the stage when "all hell broke loose" and the three of them went for cover under the stage.  They were physically unhurt-but emotionally that's another story.

Felicia commended Hooter's for getting them into a hotel room sometime after 4 a.m.. The area was in total lockdown and they weren't allowed to go back to their original hotel.  Their phones were almost dead from letting everyone know they weren't part of the casualties.  Both my sister and niece had just completed their First Aid/CPR course and let the first responders know in case they'd like a couple of extra hands.

As they finally got into the elevator, there was another concert-goer there with the telltale wristband that all attended received, he said, "These wristbands mean we're all connected for life".

They finally got a flight out of Vegas late that night.  John Wayne airport/Southwest Airlines greeted all the passengers with numerous signs telling them they were glad they came home and that they supported and loved them all.  Says something about both, no?

First thing my sister did was call their HMO to set up some counseling.  Per the office-so many others had called in that they were bringing in extra trauma counselors as well as getting them in that morning.

Obviously questions still abound on the typical news questions about this horrible crazy person, but honestly, judging from how his brother looked, he and we will never know how a seemingly "normal guy" turned into this monster without anyone noticing-including his girlfriend.

Lately, this world has been turning in a completely different axis than what it should.  It's all terrible.
I hope we can do more of the good and helpful and change back to a less violent world before there's not one left.